So spent the night in about the only room left in Canmore, just outside Calgary.  Can’t believe it was so busy – but apparently it is where the US Nordic skiing and biathlon teams live and train, so is not the sleepy little village I imagined !!
It was very overcast so kept the roof on, and decided to go into Calgary for a look, since I was so close, and then went out to High River (40 minutes S of Calgary) where I had been told there was a rodeo and chuck wagon racing on – The Calgary Stampede is not just a one off even but one of a series, and the round before the Stampede (which is on from 6-15th July) was at High River.

So Calgary is another big city.  Seems very nice but kind of hard when you just drive through a place.  And it was raining which made it even harder.  So I went on down to High Field.   Found the area with lots of motorhomes and horse trailers and horses etc in the enormous fields surrounding a stadium – But not a lot of activity.  Looked really muddy too.   Drove around until I found a cowboy – Turned out he was Security, but he was all dressed up like Wyatt Earp anyway !!  Nice guy, and we got chatting.  Turns out the chuck wagon racing had been cancelled because of the rain and conditions, and although the bull riding and a couple of other events were still on, there were hardly any spectators there not only due to all the mud but also because the timing for each event was very uncertain.  So hardly worth hanging around in the rain and mud waiting !!  So I took off again, and decided to head back to Banff, and then decide what to do from there.  I was planning to go over to Blind Bay at the northern end of the Okanagan Valley to visit with Bill and Debra who I had met  when in Zion NP in Utah, which wold only be about a    km drive from Banff, on Hwy     through Revelstoke.  I had spoken with them from Canmore and said I would be there in 2 days time.


Once in Banff, it was still raining, so I went into the information centre and found out that there were mud slides on the Hwy 1  on the other side of Revelstoke and before Sicamous, and instead of  300 km drive, the only way I could get to Bill and Debra’s was to do a great big 800 km loop down to Cranbrook, along the BC / US border, and then up the Okanagan valley from bottom to top !!  Right – Well I had better get cracking then !! When I came out of the Information Centre, there was suddenly blue sky and all the mountains around Banff were visible !!! Amazing – And I finally saw Banff, if momentarily.  So I took the roof off and got cracking as I had a long way to go. 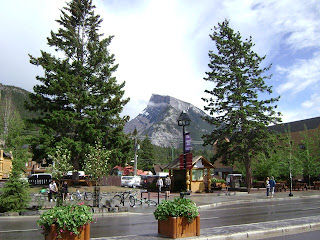 31kms up the road I saw a sign – Next fuel  104 kms – Whoops – Had been in such a hurry to get going had forgotten to refuel.  Thought I was going to have to go all the way back to Banff, but did a Tom Tom search for a petrol station and it said there was one just a km away !!  Went there, over a bridge with a big eagle’s next on top of it (with a perfect view of Castle Mountain !), and there was a little place called Castle Junction, with an old style shop, cabins for rent, and an old style petrol bowser from Heart Beat !!!  Turned out to be an Aussie running the place, so we had a chat, and it was all so nice that I nearly stayed there – until I heard the price !  $175 for the night, for one ?  I don’t think so !!  So I go outside and some IDIOT be-pierced woman in a 4 WD has backed her SUV up so close to mine is it actually pushed up against the rear clam of Elsie !!  She couldn’t wait for me to get out from paying for my fuel before she had to get at the pump herself !!  I went ballistic. All those miles all over America, and not a touch, and on a nice sunny evening 2 days from the end of the trip, some plonker decides to “lean” their car on mine !  Fortunately no major mark, but it didn’t put me in a good mood as I drove off towards Radium Hot Springs. 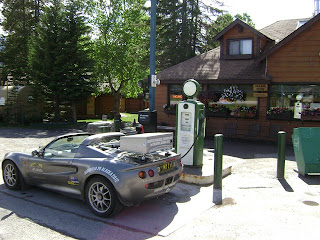 Didn’t know anything about this road other than it was the long way round to the Okanagan Valley ! (800 kms instead of about 300 !!)  So when it started going up, when it started having nice sweeping curves, when there were lakes  and rivers and snow covered mountain peaks beside the road,  and the sun was shining and the roof was off, I soon changed my mood and I was like a rat up a drain pipe !!  Somehow unexpected things are always better than ones that are just as good, but you already know they are good !! And this highway 93 was just magical.   And then it got better !!  In my mirror I noticed a car catching me, so kept my eye on him, and eventually saw it was a silver Audi.   Well, you accelerate a little and watch to see if he stays with you, don’t you ?    And he did.  So you slow down a little and see if they want to overtake, don’t you ?  And he didn’t – He just kept pace.  So for the next 50 kms or so we just went at a happy speed that would get us into too much trouble, but was great fun !  Then coming down the other side, we slowed up a bit, and came round one corner and there was a couple in the road flagging us down.  There was a great big boulder in the road that had just fallen from the cliff, and the two husbands were struggling to move it.  So I jumped out to help, and the Audi (S6, I noticed) did a U turn and the lady driver (yup !) said “I will go up and stop the traffic before they get here” and left me somewhat surprised.  Anyway, to cut a long story short we moved the rock, and when the Audi came back down I just went up and said “thanks for a fantastic drive, I’m Giles”, and she laughed and said “Enjoyed it too, I’m Connie, and look out for cops they will confiscate your car if you are more than 20 kms over” !!!  And at that moment, a cop car came up the hill and stopped to help us clear the rest of the debris, and Connie took off.  Just a great evening drive though ! 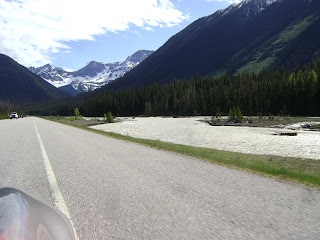 Anyway, coasted the rest of the way down into Radium Hot Springs – And what a MAGICAL little place ! The road goes through a tunnel, and then a narrow natural arch into the town itself, so you just say “Wow” as you enter the town.  And it is delightful.  Primarily a golf resort, it also has the hot springs, but also a gorgeous National Park campsite up on the hill, lots of friendly locals, and lots of Big Horn Sheep wandering the streets !!  While I was in town getting wifi at the Information centre, a guy called DJ rolled up in his car to take some pics of Elsie, so we had a good chat about my trip and I let him sit in the car etc.  Then I met two English couples who had just had dinner and had come out to take pics of the sheep in the street, and they come from SE England so we got chatting about their trip and everything.  They also were stranded by the mud slides, so I showed them the route I was taking and they thought they couldn’t do it because they didn’t have US visas – But I showed them that the road didn’t actually go into the US, which made them happy so they were going to go the same way as me the next day.  Then DJ came back and kindly told me there  were a mob of Big Horns down at his house if I wanted to photograph them, which I thought was very nice of him, so I went down there and took some photos.  Then I met  another local guy with his dog, and we chatted for a while, and then I went up to my tent .  Still fine, although it was supposed to be raining all night, so fingers crossed !    Had my supper, and a nice drop of Pinot from the local Okanagan Valley, and went to bed in a much better mood than when the day had started !!! 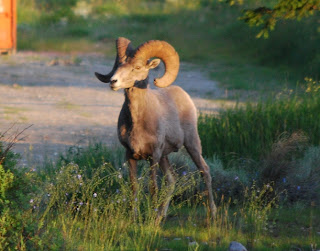