Blind Bay BC to Anacortes WA. The final leg !

For a change I had no tent to pack up, and Debra cooked me a lovely breakfast so I had a very leisurely morning compared to my normal early start !  After I had the car ready and we had taken some photos on their verandah of the lovely view of Shuswap Lake,  I set off at about 9.30. After a brief hiccup where Tom Tom took me the wrong way onto the freeway due to some new roads in the area, we set off on what was to be the last driving day of my long trip, returning to my Sister Janet’s house in Anacortes.  And the day looked promising weatherwise, so I had decided to go back down through the full length of the Okanagan Valley because I had been told that the southern part was really beautiful, so I wanted to see it for myself, and then I was going to cross the US border and then go through the North Cascades National Park that is supposed to be one of the most scenic drives in the area.   I had planned to drive into Anacortes on this road back in March when I arrived from Montana, but due to the heavy snow this winter, the road was still closed then.  So it was too good an opportunity to miss doing it now.

As far as the drive down the Okanagan Valley was concerned, I had been told correctly.  Once I got south of Kelowna (which was just a big town with lots of McDonalds and car dealerships – Not a very attractive city at all if you drive through on the main road), the scenery was much more dramatic, with Hwy 97 weaving down the west side of the lake on a road carved into the lake side hills, and looking across to the impressive Okanagan Mountain Provincial Park on the east side of the lake.  Then once past the Provincial Park, the east side became more residential , and opposite towns like Peachland and Summerland on the west side were the lovely areas like Naramata on the east side. This is a big wine growing area, and then as you go further south there are a lot of fruit orchards, with roadside stalls selling their produce all along the way.  No point in buying any when you are heading into the USA though as they will confiscate it all at the border !!  (I wonder if they then sell it back to the road side stalls to sell again !!!).   Anyway, a delightful mornings drive down through the Okanagan Valley, and although the weather was a bit overcast, it was good enough to be able to see that in good summer weather it would be really lovely down there. 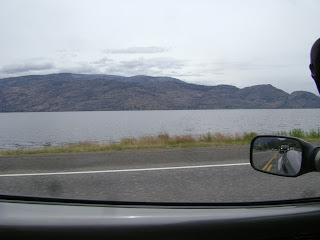 From there it was down to Osoyoos where I crossed the border back into the USA, and this time he confiscated my tomatoes which I had on the seat beside me to eat for my lunch !!  Well, I ate one there and then, and he took the other !!   If I had known he was going to do that  I would have stopped and eaten my lunch before crossing the border !! 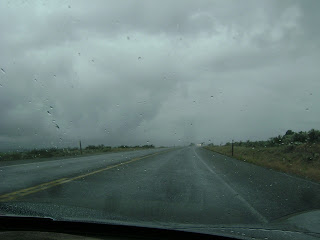 Very soon after crossing the border, the black clouds built up quickly, and it was time to put the roof on again as I could see it was getting blacker and blacker as we got closer to the mountains of the North Cascades NP.   We passed through the delightful old town of Winthrop (with its “Emporium” and wooden sidewalks and buildings), and from then on the road started to climb quickly into some impressive mountain, although the low cloud and rain meant we caught only glimpses of them.  But there was the 9087 ft  Mt Logan on the left, and then the 8928 ft Jack Mountain on the right, and a number of other peaks surrounding them. 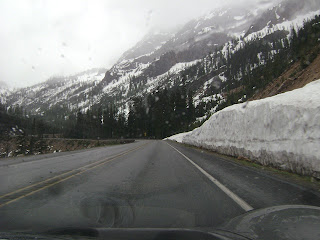 The road surface was excellent, and just perfect sweeping bends as I climbed the mountain.  Once again someone tacked on behind me, this time one of the big new Dodge retro design cars, and we had an excellent but steady run through the mountains in the wet.  When we eventually got through the summit (where there was still a lot of snow) to the beautifully green Ross Lake (caused by the glacial sediment, like at Lake Louise and other lakes), we stopped for a rest and met for a chat for a while, before we carried on down the mountain at a leisurely pace.   If anything the scenery got prettier the further we went – it would be beautiful through there on a sunny day, and there are lots of campsites through the area that are easily accessible so it is less than an hour from Anacortes.  http://travel.nationalgeographic.com/travel/national-parks/north-cascades-national-park/ 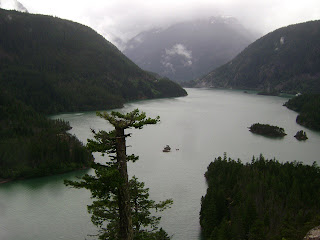 Anyway, as I neared the end of my trip, I could see blue sky ahead, so for the final hour I took the roof off, turned my favourite music up, and completed the last section of my trip into Anacortes. It ws a somewhat emotional drive, I can tell you, as I went over some of the amazing places I had seen and the wonderful people I had met across the USA and Canada over the past 4 months. And at last I felt free to marvel that this little car, which has had a hard life on race tracks and hill clibs around the world in the past, had driven over 15,000 miles / 24,300 kms virtually without missing a beat.  It had been on Laguna Seca in California, climbed all 14,110 feet of the famous Pikes Peak in Colorado, and had conquered the feared dirt roads of the Dalton / Ice Truckers Highway in northern Alaska to reach the Arctic Circle and Coldfoot,  as well as cross the 100 miles of dirt road across the Top of the World Highway through Chicken, across the Yukon River ferry to Dawson. What an amazing little car.   I will put up the full stats of the trip in my final summary of the trip with a complete ma of my journey shortly.  But in the meantime, I have to arrange for the car to be shipped back to Australia out of Seattle, as well as take a well earned rest myself. 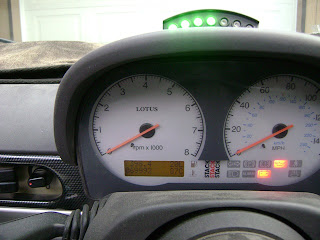 What started as just a drive, a way to see Alaska without going on a cruise ship, has turned into a life changing experience for me.  I am certainly not the same person I was when I started on this journey at the beginning of March, almost 4 months ago.  I hope I am a better person.  I think I am certainly more capable !!!!


Pics of today are here, and I will do my summary blog once I have had time for my brain to recover a little and I have had time to clean the car and get it ready for shipment to Australia.
https://picasaweb.google.com/117739775480775657932/BlindBayBCToAnacortesWA?authkey=Gv1sRgCPvpvbGAqO_LqgE#