Fort Nelson to Dawson Creek BC

Well, today has certainly been different !   Enjoyable, but very different, from start to finish !!  First of all, I was doing my blog last night in the laundry (as usual – Hey, its warm, has light, has power, and you can shut the door against skeeters !!)  Finally finished at about 11.30 pm, went outsid – And couldn’t see a thing !!!!   It was dark !! Completely took me by surprise because I have just become used to it being light all night !   I won’t say I quite needed a torch, but I also didn’t need to pull my beanie down over my eyes to keep the light out when I went to sleep either !   So that was a big wake up call that I really am heading south !!


And then this morning, woke up at 5.30 amd was going to get on the internet to check out weather and email, and the internet was down !!!   Again !!!  So much for getting up early to get it all done !  So I started to pack up, and then met Ken from Alabama who was camped net to me and was on a bike headed to Alaska, and shortly after that I met Juneal and Linda from Minnesota, and before you knew it, one thing led to another, and it was 10.30 in the morning and I was still there !!!   As I say, a very different day, but great fun nevertheless !


Ken had been on the road for a couple of weeks on his bike, heading for Deadhorse north of the arctic circle, so we had a long chat about road conditions. We also chatted about how it is to do trips like this on one’s own,  stuff we had but didn’t need, and all the other kind of similar things we had in common.  It was good to see someone having as much trouble fitting all his stuff into the limited space available like I do every morning !!!!   He had had 3 days when he got sick and had to stop, so that wouldn’t have been much fun.  He has some big miles to do to catch up – Hope you made it all the way to Whitehorse today, Ken  (I took two days to do that bit !).  Stay safe, and hope you make it to Deadhorse.  (Note - Ken has a chair to sit on !!!) 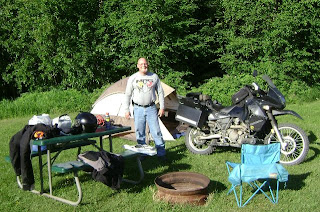 In the meantime I was still trying to get on the internet, as well as pack up my tent, and have breakfast !!  I forgot to add that t was a beautiful warm morning with a clear blue sky, and everyone running around in shorts and T Shirts !!


Juneal and Linda came over and we were talking about my trip, and ended up discussing theirs – They had been in the campsite for 10 days because they are travelling in a 5th wheel towed by a Chevy truck, and their motor had blown up just 4 miles outside of Fort Nelson, heading north to Alaska.  And they have ben trying to get a replacement engine shipped up – Hopefully it was due to arrive today so if they can get it in in the next couple of days and they will be on their way shortly.  But these are the kind of things that  can really mess up your holiday when you are on a limited time schedule.   Later on I met their husbands Sid and Orrie,  and we had a good chat and laugh about lots of things we had seen along the way !  Luckily they are in a nice campsite, and weren’t stranded half way up the Alaska Highway in somewhere like Chicken !!  Great talking to you guys, and hope you get to Alaska eventually !!! 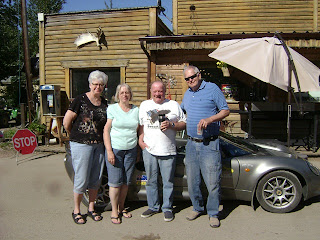 Then the camp site people tried to call the local press to have them do a story on me and my car an our trip – But there is only one reporter in Fort Nelson, and he was a bit busy, so rather than wait around for an hour, we took soe photos to send him, and also sent a copy of my blog address !   So I ay be on the front page of the Fort Nelson News – Keep your eyes peeled !!  http://www.fortnelsonnews.ca/


So at about 10.30 I finally pulled out on to the road to head south towards Fort St John and Dawson Creek.   I filled up with gas and got started with a beautiful blue sky and sunshine. The road today was basically flat and undulating all the way, with forests all the way. In the sunshine it was a very pleasant drive of about 450 kilometres, but there were no animals at all to see today (I lie -  I saw one ground squirrel !!)  and most of the day was spent working out if the two or three REALLY big rain clouds were going to drop their load on me !    A couple of times I was so close to stopping to put the roof on that I was actually looking for a suitable stopping place.   But I never did find a place to stop, and they never did drop their load on me – Each time the road would suddenly turn away from the visible rain that was falling, and I would laugh, and off we would go again.  That ust have happened 10 or 15 times !!


However, there was one spot where they were doing roadworks, and our group of cars JUST missed getting through before the lollipop lady (they are all female up here !) switched her sign to STOP.  And just as we were stopped, it decided to rain !!!!  OH NO !!!!   I could see blue sky all around, but we were sitting under a black cloud !!   So I decided to wait it out, and threw my shower cape over my head until the worst had passed.  But the sniggers coming from all the other cars and trucks behind me were easily heard !!!   Little moments like this that make life so much fun !!! 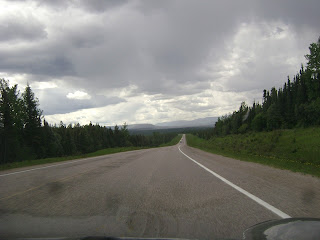 After that it was a pretty straightforward run into Fort St John where I went into Safeways to get a coffee and some free wifi from Starbucks, and to do some shopping for this evening and tomorrow’s lunch, and to gas up as I was down to just 10 litres in the tank.   I then decided I had enough time to get a bit further down the road, so carried on another 50 kms to Dawson Creek, and I am currently in a campsite called “Camp Zero” because it is in Dawson Creek that the Alaska Highway officially starts at kilometre zero, and goes all the way to Big Delta near Fairbanks.   But more of that tomorrow as I will get a photo of the official sign.


Met a lovely couple from Florida who are in the next door site to me -  Jim and Niki, who recognised me from Dawson City, and on the other side is Eric who works up here and lives in his caravan – He was kind enough to put my two warm beers in his fridge when I arrived so I could drink them !!  So all of us sat around discussing the issues of the world (from a Canadian point of view !!) and having a couple of beers !  Very pleasant evening.


And now, at 9.30 at night, with the sun just going down, just as I am sitting here finishing my blog for the day,  I have just had a guy called Chris Gibson and his family stop in – They saw my car from the highway and had to come down and see what it was !!  They ended up wanting to sit in it and talk about driving on the “wrong” side of the road etc !!    Life is a hoot sometimes !!!


So a fascinating day really, and I have enjoyed it.  Clear sky again tonight, so lets keep  fingers and toes crossed that it continues the same tomorrow !!


PS  Since i wrote my blog but before i could post it, two more couples have come over to see the car !!  Might have to put up a "Closed" sign at night as I am sure they are disturbing the neighbours !!   Rofl.