Dawson Creek BC to Jasper AB

Well I might have woken up early, (with the dawn at 5.30 am) but I certainy didn’t leave the camp site very early !  The morning was one long precession of people to chat to, and they varied from a Frenchman cycling though America who has been on the road or 5 years, to a guy from Arkansas towing a Honda Gold Wing trike to Alaska because that is the only US state he hasn’t ridden it in, to a blow up doll strapped on the back of a bike !!  And hen I did finally get away, it was a beautiful sunny day, and the drive just got…..better  the closer we got to Jasper.   Except for one torrential downpour !!!

A beautiful warm morning, and a dry tent, on the outside at least.  You find that you do tend to get a lot of condensation on the inside of the fly sheet during the night, so you have to actually dry the inside of the tent, not the outside !!      To allow for this, I pack up in stages, thus allowing the fly sheet to dry out in the sun before t gets packed in the car, and in the meantime folding up air mattresses and sleeping bags, and having breakfast.  It usually takes about 2 hours to get it all done at a leisurely pace – Especially when I have a perpetual stream of visitors during the morning !!


First of all I was chatting with Jim And Niki before they took off fairly early.  They told me that while the Calgary Stampede is on from 6th – 15th July, the round before that, including Chuck Wagon racing, is on this coming weekend in High River, about an hour south of Calgary.  They are headed down there, so depending on weather and what I find in Banff / Jasper NP,  I may try to make it down there. 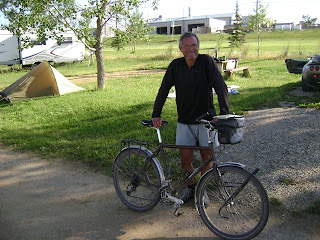 After they left, I chatted to Jean-Marc, my  French neighbour on the site who is riding his bicycle up through the Yukon this year.  Wants to do Alaska but that will have to wait as he will run out of time, and during the US winter he is off to Australia to ride around there (not for the first time!)   He has already ridden through South America from Ushuaia up to the US, and has been on the road for about 5 years.  Before that he used to travel  by motorbike.  Turns out he also worked for Schlumberger for some time, who now own the company I worked for for 36 years !!   This morning he had to go into Dawson Creek to a bicycle shop to try to get a new front wheel bearing as his is collapsing – When I asked him how long ago it was last replaced, he said in his French accent “Poof – I only replaced it when I was in Argentina “  !!!!  I thought this was hilarious, as that wheel must have turned a few million times since he was in Argentina and then rode all the way to the USA !!! Good luk, Jen-Marc, and look me up when you get to Queensland and need to pitch your tent in my garden !!!


Then a group of native Alaskans from a remote community on the west coast of Alaska called, funnily enough, Hooper Bay, came over for a chat about the car. They are off on a trip to Missouri for some kind of community travel experience , and we were trying to think why they would want to go there ! But they were excited because they have never been there before !  Harold was the nicest guy, and we chatted for some time about where they were from and what it ws like up there, before they had to go and pack up their camp site and get on the road as well.  Hope you have a great trip, guys. 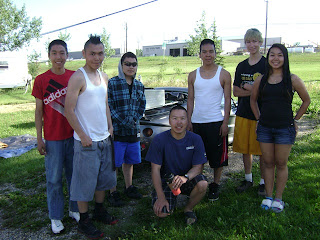 I chatted with Ron  about Australian Holden Monaros being brought into the US and badged as Pontiacs (he wasn’t convinced so I have to find the proof and email it to him,),  and then there was Kenny who has driven all the way up from Alabama and is now joining a tour group of about 17 more motorhomers from all over the USA who are then on a tour where, starting in Dawson Creek, they travel independently to Alaska,  but are prebooked by the tour company into camp sites each night, and have a mechanic and tour guide who travel with them, and they go on different tours on certain days.  Kind of “coach tour but bring your own coach” type of thing  !!  Seems a bit odd to me, but he is looking forward to it as he likes the group thing, and also likes the idea of having a mechanic included in case of problems.


And of course there was JR from Arkansas who had a Gold Wing trike. He had owned it as a bike, but when he got too old to ride it confidently, he had it converted to a trike, and as Alaska is the only US state he hasn’t ridden it in, he is towing it all the way up to Alaska behind his motorhome !! 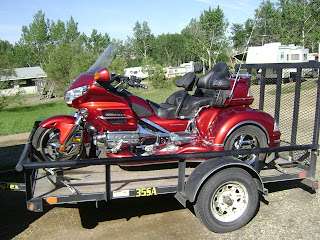 Oh and then there were the bikers.  There was one "older" rider in their group, and they had given him a life size blow up doll to keep him company on their trip - But he refused to carry it !!  So the others carried it for him - strapped to their bike !  They even put a T shirt on her to make her more decent - Trouble was the T shirt blew up around her waist at any speed over 20 miles an hour, so all her decency was lost anyway !!  Rofl.  People have real fun on this highway because it is an adventure for everyone, and everyone understands that everyone else is someohow fulfilling a lifelong dream by being here. 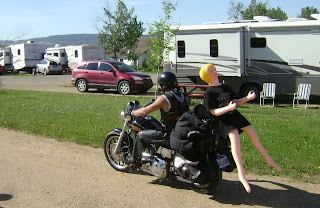 After a few other equally fascinating people I spoke with, I eventually hit the road at about 10.30 !! Beautiful sunny day, so roof off, and I went down into town where  there is a sign marking Mile Zero for the start of the Alaska Highway – This is where they started building the road in 1942, and it was completed to just short of Fairbanks (actually Delta Junction) in only 9 months.  An amazing engineering feat.  I have now driven the entire length of it – 2450 kms / 1523 miles. 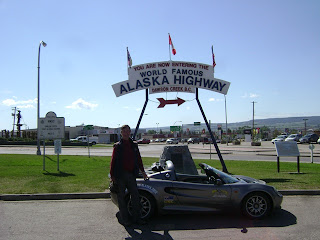 After filling up with gas, it was off down Hwy 2 to Grand Prairie, 138 kms south.  This was just fairly monotonous undulating roads through forest.  After Grand Prairie (where I forgot to get gas and had a few nervous moments later !) it was pretty similar, and the road even straighter, all the way to Grande Cache, a further 182 kms south.  It wasn’t boring at all, as it was such a lovely day, and the road was always interesting, but it wasn’t THAT good !!   But then, just before Grande Cache, at right on 3.30 pm (I was in Alberta now and had lost an hour), a snow covered mountain appeared in the distance – the first view of the Rocky Mountains in this area.  And from then on the road changed and became more and more interesting as we got closer to Jasper.  I got into Grande Cache with the tank showing “refill”, and I am never sure how much is left when this happens !!  Still, all was good, and I also found some Maynard’s Wine Gums in the gas station there, so it was a successful stop !


While heading towards Hinton, the sky ahead got blacker and blacker, and although we were due to turn right in Hinton, which would take us back towards blue sky, about 5 minutes before Hinton as we came down a long hill, I could see the rain ahead of me on the road.  So I quickly pulled over and had only just got the roof on when the heavens opened big time !!  Smiling to myself, I drove through Hinton, did the right turn into Jasper NP, and 15 minutes later was in bright sunshinea gain and able to take the roof of ! 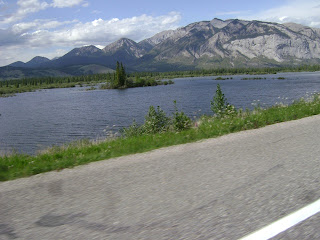 From there into Jasper was a scenic drive with the mountains and lakes beside us.  Saw some mountain goats and also a moose with  fine set of horns already, but there must have been 30 cars stopped there – Of course we now have a lot more tourists here than up north, so everything is going to be that much more crowded !!  Going to have to get used to that.


Saw a sign to a camp site in the National Park right next to Jasper town, and as I had already pre-purchased my Canadian National Parks pass on the internet before I started the trip, I was able to get in without paying the fairly exorbitant daily park fees that are required here (unlikely the US where park entry is a single fee covering you for however many days you want to stay there. )  Fantastic forested camping area with so much space between sites you hardly know anyone else is in here.  Lots of warnings about rampant Elk protecting their young during the calving season – They actually come into the camp area to calve because they know wolves and bears (which find baby elk rather tasty) don’t like to come in where the humans are !  So it is a bit of a catch 22.  Anyway, I am all set up, I went into Jasper to check it out briefly and get some milk for the morning – It is a bit like a ski village – Lots of motels and restaurants to cope with all the tourists.  Personally, I will take the great camp site, and hope the elk go and stomp on someone else’s tent !!!


They say rain is likely tomorrow, unfortunately, but I think I will take a day off driving and go for a hike somewhere.  I have been driving every day for 7 days, ever since I left Anchorage, and need a break, especially since I still have a fair old distance to do before I get back to the US and my sister in Anacortes.


Couple of interesting “incidents” with the car.  I heard a loud crack as a stone hit me somewhere yesterday (not on the windscreen, but on the body somewhere) and found this morning that it ha actually hit one of my Roo shoos (deer scarers) mounted down on the front, and knocked it clean off !!   Also found I have an Alaskan hitch hiker.  A big blowfly somehow got inside my sealed headlight cover, and then crawled up into a very narrow space between the Perspex cover and the bodywork, and got wedged tight, and died there – But in full view !!  So I will have to find a way to get him out beore the car is shipped back to Aus or the Envirnmental Inspectors will have a field day when it arrives with “dangerous Alaskan Wildlife” aboard !!   Rofl. 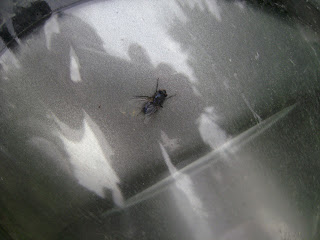 So that’s about it.  I am in Alberta, and looking forward to a few days in the national park exploring – as long as the weather holds.